The phenomena of the so-called “Rife machine” or “Rife frequency generator” or the “Rife resonator” as it is also known. 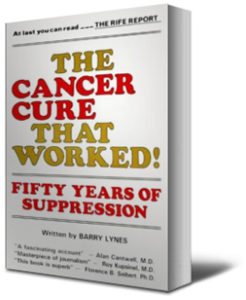 On November 20, 1931, forty-four of the USA’s most respected medical authorities attended a dinner celebrating “The End To All Diseases”. The End to All Diseases because Dr Royal Rife developed a device that could generate frequencies that literally destroyed cancerous cells and pathogens without harming the human body. Because of the severe side effects of so many medicines and the orthodox treatments of cancer, Dr Rife’s technology has been rediscovered and all over the world scientist and engineers are building frequency generators to simulate the results of Dr Rife’s original instrument. These instruments are referred to as “Rife Generators” or “Rife Resonators”.

What is a Rife Resonator?

A Rife resonator is a generic name for basically a frequency generator that is able to generate square waves as well as to generate those frequencies identified by Dr. Royal Rife in the 1930s to destroy a wide range of bacteria, fungi and viruses and even cancerous cells. A “resonator” is used in resonance therapy. Regular sessions of resonance therapy is claimed to strengthen the body’s immune system against infective deceases

By exposing disease organisms to highly modified forms of their own unique electromagnetic pattern of oscillation, Rife discovered that he could destroy them (and nothing else) by the million.

Every biochemical compound oscillates at its own distinct frequency pattern. Therefore, every living thing has its own unique electromagnetic signature, and this pattern is genetically determined—and is therefore unique and unlike any other species.

Just as a wine glass is shattered only by a particular frequency, so by applying a resonator to generate the frequencies that Rife discovered only the disease organisms whose oscillation pattern corresponds to the modified patterns are destroyed. Also think of a balloon filled with water. Under a microscope many organisms look like little balloons filled with water. They have membranes filled with liquid -very similar to water filled balloons. Now start shaking the balloon vehemently. If you shake it twice in a second then the frequency is 2 Hz.

Keep on shaking it and the balloon will eventually perish. The Wave Resonators can generate frequencies up to 20 000 Hz. This means it can literally “shake” pathogens to pieces while no harm is done to the human body: Making this the safest method to combat infectious diseases and ailments.

By applying resonators to destroy the direct cause of many diseases a new therapy was born. Today resonance therapy (Rife therapy) is one of the very few therapies known to be free of any side effects.

Royal Raymond Rife was a brilliant and persistent scientist. Where technology didn’t exist, Rife invented it — the very first micro-manipulators, micro-dissectors, and ultraviolet microscopes. He won 14 government awards for scientific discoveries, as well as an honorary medical degree from the University of Heidelberg.

Royal R. Rife, born in 1888, was one of the greatest scientific geniuses of the 20th century. He began researching a cure for cancer in 1920, and by 1932 he learned how to destroy it in laboratory cultures and went on to cure cancer in animals. In 1934, he opened a clinic which successfully cured 16 of 16 cases within three months time. Working with some of the most respected researchers in the America along with leading doctors from Southern California, he electronically destroyed cancer in patients, allowing their immune systems to restore health. A Special Research Committee of the University of Southern California oversaw the laboratory research and the experimental treatments until the end of the 1930s. follow-up clinics conducted in 1935, 1936 and 1937 by the head of the U.S. C. Medical Committee verified the results of the 1934 clinic. Independent physicians utilizing the equipment successfully treated as many a 40 people per day during these years. In addition to curing cancer and other deadly diseases, degenerative conditions such as cataracts were reversed.

What is Resonance (Frequency) Therapy?

It is a natural health modality based on the use of electronic frequencies to bring about improvements in a person’s health: elimination of bacterial, viral, mold and parasite infections in our bodies.

What is a frequency?

Please explain how your equipment works.

The frequencies are produced in an electronic device called a frequency resonator or also called a “resonator”. The energy points in our fingers are connected to electrodes, so that the therapy can be reach the whole body.

How can you claim to eliminate a bacterial infection in a person’s body by applying an electronic frequency to the body. Surely we need antibiotics?

Yes, but some doctors are aware that the information that they acquired at the university can no longer be regarded as cutting edge technology. There are many medical doctors who are already using frequency therapy to treat their patients. Please note that antibiotics have no effects on virusses while on can can destroy virusses with a resonator.

Is it not dangerous to apply electricity to a person’s body?

Electricity can be dangerous if the intention is to electrocute or kill a person, just as plants can be used as medicines or poisons. Electricity can also be dangerous if it is a harmful frequency that is produced in an appliance like a cell-phone or a computer. The Wave Resonators only emit beneficial and healing frequencies in the audible frequency range that are completely safe to humans and animals.

Why does one need sometimes more than on frequency to eliminate bacteria and virus infections in a person’s body?

On the Wave Resonator’s default treatment list one will find treatments. Each treatment consist of at least one frequency, but most treatments have more than one frequency. Every bacteria, virus, mould or parasite infection in our body resonates at a specific frequency. In order to eliminate them efficiently from a person’s body, we need to apply an external frequency to the person’s body. Such a frequency should resonate at a speed very close to the speed at which the infection in his or body resonates. Most of the times you are not only infected by one virus. The flu virus for instance wearies ones imune

How exactly does the frequency bring about the elimination of a bacteria or virus infection?

Imagine a wine glass shattering when somebody sings. That is because the voice reaches the same frequency as the glass and it vibrates itself to pieces.

Are you telling me that bacteria and virus infections in our body explode into pieces with this therapy?

Exactly! This has been scientifically proven many times. Read more about this phenomena here. When we come very close to the vibration of whatever bacterial or viral infection in our body. But even in cases when we apply a frequency that does not vibrate exactly at the same rate as the vibration of the infection, it still damages the infection sufficiently. Such an infection will after a while (plus minus two hours after the treatment), no longer be able to attach itself to any part of our body and being weakened, it will be expelled by the body.

Is it really necessary for us to use resonance/frequency therapy devices such as the Wave Resoantors to ensure our good health?

Holistic Frequency Therapy is a very natural and highly efficient way of eliminating infections and cleaning the body of toxins. Our environment is no longer something that we can regard as natural because of all the toxins that we are getting exposed to on a daily basis. Frequency therapy is becoming the medicine of the future, as it is a very efficient way of cleaning our bodies and to strengthen our immune systems.

No, not at all! In fact it is very good at cleaning the system of toxins. A person who has already experienced this form of therapy will be able to give evidence as to how the toxins that accumulated over years in their bodies started leaving their bodies since they started the therapy.

People are dying daily from cancer, AIDS and tuberculosis. How could holistic frequency therapy and other natural healing modalities possibly help to improve their health?

Infectious diseases can only come and nest in our body if they can find food to eat: the toxins in our body. The health of people would certainly improve by eliminating toxins, parasites, moulds, viruses and bacteria and by educating them on ways of preventing their return. If treatment could include oxygen therapy, colloidal silver, herbal remedies, adaptogens and food supplements, our future might start looking much brighter. Improved sanitation, hygieneand safe sexual conduct can also help to prevent the spread of diseases. Toxic medication is not the ideal way to treat great numbers of sick people or to keep them healthy. We need to look at an integrated approach for our sick people and a Wave Resonator can make a great contribution to community health as it is safe, cost effective and convenient. It has only beneficial effects.