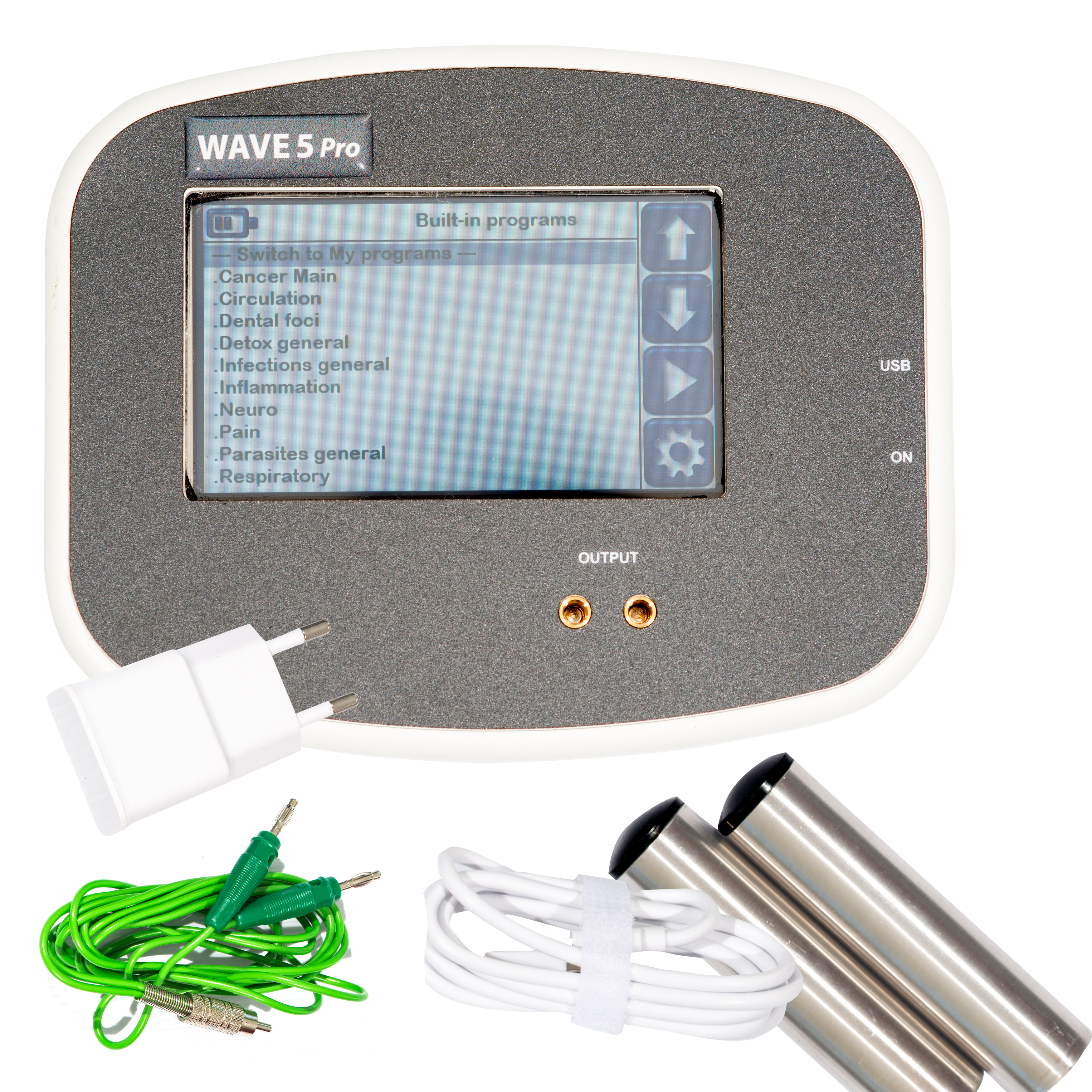 The Wave range of Resonators

The Wave Resonators are compact, powerful, effective, and with their touch screens very easy to operate. With a Wave Resonator, you have a broad spectrum healing machine at your fingertips.

The Wave Resonator range have all the treatments to address the most common ailments and health problems (That can be treated with electrotherapy) installed. No need to add anything as it is already there but if however, the need arises to add you own range of frequencies you can do that by just connecting it with the supplied connection cord to a computer and use the easy software to edit treatments.

The Wave Resonators are battery supported and although compact in size they are powerful enough to do the job effectively thanks to the application of the latest electronic technology combined with Swiss precision engineering.

Because of the emphasis of frequencies that combat infections in resonance therapy, the Wave resonators can be used to treat in a complementary manner a wide variety of illnesses caused by infections.

The Wave resonators’ design and development are based on accumulated research data spanning many years. Not only did the designers and developers concentrate on the bio-resonance generation but also on the advanced components used in the generator. This broad front design approach forced them to give close attention to the user interfacing of the instrument as well. Making ease of use top priority.

Even without instructions, you will be able to understand the intuitive interface.

The interface of the Wave resonators is similar to that of a cell phone.

You are always welcome to call during South African office hours if you need anything explained.

A Wave resonator comes with a complete set of accessories and the necessary manuals and easy to understand instructions to enable the user to start operating it immediately.

The Rife Health Resonators have treatments for almost all ailments that can be treated with resonance therapy.

Treatments stored on the Wave Pulse

Please note that The Wave resonators’ list of stored treatments is a compilation of treatments that have been included because of for their effectiveness. The Wave range of resonators can store many more treatments, but we have only selected those that will really be effective. The user is however cautioned to refrain to add any more treatments because Rife Health has tested these treatments and found that the stored treatments are the most effective. Most resonators on the market have many more treatments stored on their devices but they are untested. The user is then confronted with literally hundreds of treatments for example for cancer which the manufacturers just downloaded from the Internet from dubious sources. It is then expected from the user to experiment with untested treatments to find the treatment that works. A user with a terminal disease has no time to experiment. The beauty of Wave resonators are that they are effective thanks to being tested for years in clinics before they were rolled out to the public.

WaveTech provides technology-based health devices such as electromagnetic resonance and ozone generators that can be used in therapies to replace often dangerous medical treatments and ineffective medication. WaveTech’s devices are based on the principles of natural healing and they are completely safe and have no side effects. WaveTech is in existence since 1999 and is one of the main global suppliers of “Rife” devices.  Quality devices and continuous after-sales support are part of the deal to ensure that customers have not only a healthier outcome but also have peace of mind about the reliability and effectiveness of their devices. WaveTech’s instruments were tested over more than 2 decades in several clinics to ensure continuous development to ensure that we can present the best resonators on the market and offer them at the lowest prices possible.

The Wave resonators have all the possible resonance therapy treatments stored in their devices.  It includes the cancer cell destroying frequencies as discovered by Dr. Royal Rife and been reported on in the book “The Cancer Cure that Worked”.

No investigating and experimenting needed anymore. The Wave resonators are ready to use and loaded with the tested treatments that are effective (Most other Rife-type manufacturers have large lists of untested treatments from dubious sources on their devices). Because of the emphasis of frequencies that combat infections in resonance therapy, the Wave resonators can be used to treat in a complementary manner a wide variety of illnesses caused by infections.

This site uses Akismet to reduce spam. Learn how your comment data is processed.